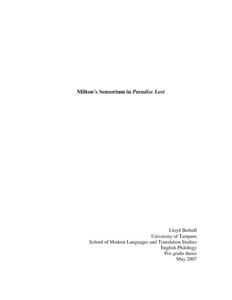 Englantilainen filologia - English Philology
This publication is copyrighted. You may download, display and print it for Your own personal use. Commercial use is prohibited.

Milton created an extremely sense-filled sensorium in Paradise Lost, which can be understood and interpreted both metaphorically and literally. Milton emphasises that when God created the universe, a harmonious relationship was created between everything ethereal and corporeal; this harmony also extended to and included the five senses.

Sin first entered God’s created universe when Satan and his angel-followers rebelled against God. This brought about the first disharmony of the sensual universe and resulted in Satan and his followers being thrown into Hell ­ a sensory antonym to Heaven. The second disharmony, and the disruption of the whole sensual universe for mankind, occurred when Satan escaped from Hell and, as revenge, causes the Fall of Adam and Eve.

The senses are found to play an extremely important role in Paradise Lost: they dualistically convey the changes brought about by sin to the harmonious world and they also lead to sin through their temptation. Milton’s distrust of sensual perception leading to correct cognition also becomes apparent through the research. The relevance of Paradise Lost today is discussed finally in the conclusion.

This thesis offers a new sensual reading of Paradise Lost: the role of all the senses pre- and post-Fall and their theological interpretations are analysed, which have not been researched as a whole before this thesis. This gives new insight into the use of Milton’s sensorium and opens up Milton’s sensual and materialistic world-view. Through this sensual reading four main findings become evident: the use of the senses to convey the effects of the Fall; the role of the senses in the Fall and sin; Milton’s scepticism of the senses ­ that perception alone does not lead directly to cognition; and finally Milton’s materialistic views.