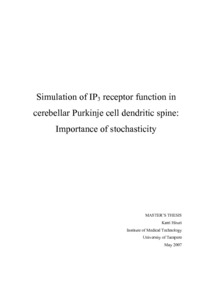 Background and aims: This thesis investigates calcium dynamics in cerebellar Purkinje cells. A special emphasis is put on the Purkinje cells dendritic spines where most of the synapses are formed. Transient rises in cytosolic calcium concentration in spines have a crucial role in initiating long-term depression (LTD) of synaptic activity. LTD is one form of synaptic plasticity and it has been found to be one of the mechanisms of motor learning. One of the most important factors in calcium dynamics is the inositol-1,4,5-trisphosphate receptor (IP3 receptor). This protein is a ligand binding calcium channel and it is responsible for releasing calcium from endoplasmic reticulum to cytosol. The IP3 receptor is highly expressed in Purkinje cell spines. Modeling and simulation are an effective way to study the dynamics of intracellular events. The small volume of the spine increases the stochasticity (randomness) in the biochemical processes and this aspect is not considered in traditional deterministic simulations. In this study, the importance of stochasticity in simulation of the function of IP3 receptor was examined. Stochastic simulations are assumed to produce more realistic results compared to deterministic simulations. The aim of my research was to study the effect of stochasticity in modeling by comparing stochastic and deterministic simulations of the function of IP3 receptor, located in cerebellar Purkinje cell dendritic spine.

Methods: Based on a large literature review, two different mathematical models describing the function of IP3 receptor were chosen as test cases. In short, both models describe the reaction kinetics of IP3 receptor. These models were simulated both on a deterministic simulator and on a more biologically correct stochastic simulator. Two different kinds of simulations, open probability and dynamic, were performed with both simulators.

Conclusions: Results of the open-probability simulations verified that the models were implemented correctly. It can be shown based on dynamic simulation results, that there exists a threshold below which the effect of stochasticity in reaction kinetics becomes meaningful. In conclusion, the deterministic simulations do not produce biologically realistic results under all conditions.