Harmonisation Challenges in Higher Education: Case of the French and British Bicultural System in Cameroon 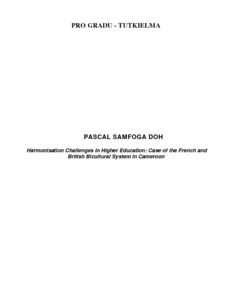 Viewing the recent global prominence of harmonization in higher education (HE), this thesis sought to contribute a practical experience from Cameroon, which has had a tradition of harmonisation in the French and British educational systems. The study investigated the systems’ diversities and their significance on the harmonization policies in Cameroon. In order to establish the generality of the challenges, the conceptual variations of the global phenomena were examined with the case study. Differences in their contexts and scales were acknowledged, but their conceptual similarities noted on the significance of “cultural diversity’ in HE.

Analyses on the systems’ steering of the two subsystems pointed to disjuncture between macro level intentions and institutional practices. It revealed the tendency of different bottom-up initiatives meeting with monocultural experiences at the system level or, top-down policies versus bottom resistance as per the educational foundations and systems’ spirit. The bilingual university as a feature of the bicultural system mirrored likely challenges of today’s university viewing the growing use of extra language(s) of instruction. Challenges in maintaining language balance and dealing with its related cultural, economic and logistic implications were raised. The diversities were also found to be significant on the degree structures, grading systems and HE teaching qualifications. Similar challenges on harmonisation of the degree structures were seen to exist in, or result from the grading systems’ and also between degree structures and the teaching qualifications. The challenges were observed to result from: approximations, arbitrary interpretations, and lack of systematic and consistent criteria for equivalences, lack of equivalences in the next system (eg qualifications), unjustifiable inequalities and inconvertibility between systems. The researcher noted that a common degree structure with comparable grading system would limit their discrepancies. Systems’ curricular differences were found to impact on students’ approaches and achievements. Based on certain contents and methodological issues which find greater coherency within the educational systems, curricular issues were observed to be differentiated between the two subsystems. This led to the assertion that the bottom-heaviness of HE, differences in traditions and foundations limit the range of harmonisation policy issues. It raised the impact of systems’ cultural characteristics on the teaching-learning process in multicultural settings.

The study suggests that in its practice, HE harmonisation require mutually-reinforcing strategies that factor agreements between joint policies and bottom educational practices. In the bicultural system, harmonisation seems to have been tackled through a frame of policy options depending on specific objectives and effectiveness, such as: 1) equivalences aimed at comparability and mobility 2) differentiation to respond to diversities 3) standard criteria with equivalences and 4) cross-substitutions. Based on the case study and issues from the global phenomena, certain characteristics of harmonisation challenges in HE were observed such as: 1)‘diversity” which normally challenges integration 2) the necessity for “differentiation” which challenges the extent of integration, its limit or questions the capacity of simplified frameworks responding to diverse needs of HE such as; lifelong and adult learning, certification of voluntary drop outs, exigencies of certain professional degrees and demands of external knowledge users. 3. “Homogenisation skepticism” or “cultural protectionism” as against cultural exportation, macdonalisation of contents or conformity. On grounds of the above, the researcher observes that HE Harmonisation would seem to remain a union of systems’ convenience or unity in diversity.