Implementation of the Bologna Process in Russia: Tomsk Polytechnic University as a Case Model 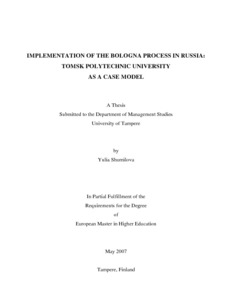 The purpose of the present study was to investigate the impact of implementing the Bologna Declaration (1999) in Russian higher education institutions (HEIs) as a consequence of Russia’s signing the Declaration in 2003. The philosophy of adaptation is supposed to result in the modernization of Russian higher education (HE) and Russia’s complete integration into the European HE community. A confluence of political, social, economic, and academic factors, however, has influenced the implementation of international reforms. In the present study, a single progressive provincial university was chosen as a case study, examined through the prism of six critical variables and four analytical dimensions, and then extrapolated into a wider context of Bologna-related policy formation, public debate, and local publications. The case study suggests that other HEIs were able to integrate and implement the Bologna Declaration principles successfully; that the main strategies used in Bologna process implementation are neither top-down nor bottom-up in nature, but a mixture of both models; that challenges facing reform involve issues of awareness, government support, and funding; and that the major implication of Russia’s participation in the Bologna process is the increased competitiveness of Russian HEIs with the European community. These results are discussed in terms of the limitations of the present research. Predictions concerning possible policy implications are made, and the need for further research is explored, especially in the context of how Bologna process implementation in Russia compares to that in other signatory countries.