THE VIRULENCE OF PNEUMOCOCCAL STRAINS T4, ST124, ST138 AND ST306 IN ZEBRAFISH EMBRYOS 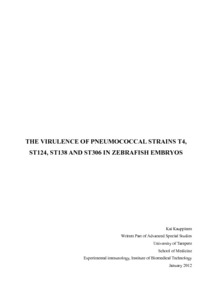 Streptococcus pneumoniae (pneumococcus) is one of the most important human pathogens worldwide. The development of new effective protein based vaccines against the bacterium has long been goal of scientists.

Each bacterial strain was injected into blood circulation of zebrafish embryo. The survival of the embryos was followed daily and after 72 hours the final survival rates were calculated for each strain. The combined survival rate for ST124 was 25 %, for ST138 92% and for ST306 11 % (P<0.0001). The most striking result was the high survival rate of embryos infected with ST138. In humans and mice this strain and serotype (6B) is associated with high mortality.

There might be several reasons for the different behavior of the bacteria in zebrafish embryos. The somewhat lower temperature of the embryos might have an impact on pneumococcal virulence.  Also, infection route was different in these experiments than in earlier mouse experiments where bacteria were inoculated into nasal cavity. Moreover, the lack of acquired immunity in zebrafish embryos might have an effect on the course of infection. It can also be that the capsule expression of ST138 is somehow altered in zebrafish embryos leading to the lower mortality observed.

As a conclusion, this study demonstrated that even though zebrafish embryos can be used as a model of disease, the differences in host environment might affect the virulence of the bacterium and must be recognized when using this model.