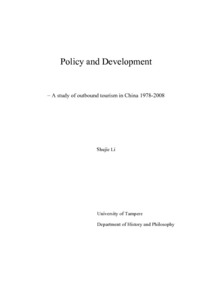 Along with the development of tourism itself, research into the subject has made great leaps since the Second World War. Tourism has been widely recognized as very complex, since many other industries are involved in it, and tourism policy has even been thought of as ‘not only a continuation of politics’ but also an integral part of the world’s political economy.’ Therefore, the study of it should be tightly linked with history, because ‘there is no way that contemporary international political economy can be understood without making some effort to dig back to its roots, to peer behind the curtain of passing time into what went before’. Based on these viewpoints, the aim of my study is focused on the relationship between the miraculous development and policy adjustment in Chinese outbound tourism in the past thirty years (1978-2008). The heart of the study is an analysis of the change and impact of tourism policies on the process of development of outbound tourist industry at different stages after the implementation of reform and the open door policy. Firstly, regarding the extraordinary period (1978-1996) of the renascence in tourism under the policy vacuum, possible reasons to limit the increase in outbound tourist were analyzed from both an economic and political angle. Secondly, in order to explore the reasons for the boom in tourism from China since the turn of the century (1997-2005), a detailed comparison of most important regulations concerning outbound tourism was made as well as an analysis of what lay behind the launching of the official policy. Thirdly, the newest policy (2005-2008) of outbound tourism in China was discussed in relation to the new challenges for a strategy on tourism posed by globalization. Through the study, the author tries to identify clear traces of the development of outbound tourism and the adjustment of tourism policy and the relationship between them.

Since 1978 China has experienced a great change both in social politics and the national economy. In 2008 the roots of the command economy had still not disappeared completely and a market economy had not quite taken over. As a result, policy-making and the development of the tourism industry in China occurred within a special and complex environment. Although some restrictions on outbound travel have been moved in order to meet market demand, the shadow of the command economy are still marks an impact on the practice of outbound tourism. This reflected the situation of China which was being affected by both socialism and capitalism. Consequently, tourism policy still included elements of the command economy, while it has absorbed some principles of market economy as well. However, due to the gradual adjustment of policy, the industry of outbound tourism of P. R. China has experienced an unparalleled revolution, its miraculous effects clear visible. In particular, the new regulations that have been issued indicate that the policy towards outbound travel has been largely changed from restricted to open. In addition to that, the discussion of new tourism strategies revealed that the industry of outbound tourism has been recognized as a comprehensive function, not simply as a political implement. Most importantly, this study showed that the policy of outbound tourism has been increasingly market oriented rather than maintaining its traditional form under planned control; consequently the industry of outbound travel  has been stimulated along with it.