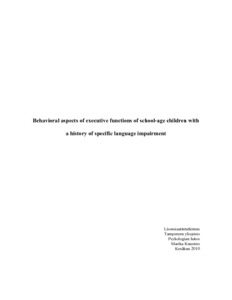 Purpose Children with specific language impairment (SLI) have deficits in language and often in other cognitive functions. Language has a central role in cognitive self-guidance. Yet there is a lack of studies on the executive functions (EFs) of children with SLI in everyday environment. The aim of this study was to describe behavioral aspects of EFs of school-age children with a history of SLI and compare them to the functioning of typically developing children. Group comparisons in EFs were made also considering the effects of nonverbal IQ.

Methods Participants were 7 to 9 year-old children with a history of SLI (n=22) and age, gender and maternal education matched children (n=22) with typical development. The EFs were assessed by parents and teachers using the Behavior Rating Inventory of Executive Function (BRIEF). Intellectual functioning was assessed with the Wechsler Intelligence Scale for Children. EFs of the groups were compared with paired analysis using conditional logistical regression models, with and without controlling for the Performance Intelligence Quotient (PIQ).

Results Statistically significant differences between the groups were found on four Parent BRIEF scales and on six Teacher BRIEF scales. The group differences partly remained after controlling for PIQ.

Conclusions School-age children with SLI have more deficits in executive functions in daily life than their peers. In clinical practice, it is recommended to pay attention to EFs when assessing and planning interventions for children with SLI.