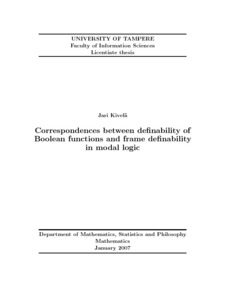 We establish a connection between term definability of classes of Boolean functions and definability of finite modal frames. We define a bijective translation between functional terms and uniform degree-1 formulas and show that a class of Boolean functions is defined by functional terms if and only if the corresponding class of finite Scott-Montague frames is defined by the translations of these functional terms, and vice versa. Since clones in particular are term definable, we obtain for each clone a corresponding class of Scott-Montague frames which is defined by uniform degree-1 formulas. As a special case, we get that the clone of all conjunctions and constant functions with the value 1 corresponds

and the clone of linear functions.