Professional Roles of Russian Journalists at the End of the 1990s : A Case Study of St.Petersburg Media 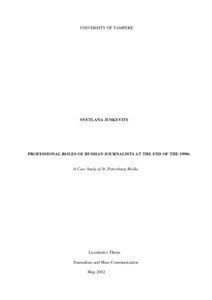 The study explores the professional roles of contemporary Russian journalists with the aim to discover how journalism contributes to the development of democracy and civil society.

St. Petersburg at the end of the 1990s is presented as a case in the post-Soviet situation combining features of centre and periphery.

The study started in 1998 with a pilot study based on 11 expert interviews, continued in 1999 with 30 in-depth interviews with journalists and was completed in 2001 with an inquiry including 12 experts. The data represent local conditions of journalism in media chosen for the study. The study pursues intrinsic and instrumental interests in research on journalists by combining open questions (to obtain free responses) and closed questions (to focus on specific professional topics). The phenomena of professionalism are approached, on the one hand, through design and theories used in earlier studies on journalists, while on the other hand, a free look is taken at the phenomena still unclarified conceptually and empirically through procedures of grounded theory.

The subculture of the old generation is quite homogeneous and conservative, represented by 'standardized' professionals recruited (mainly after school and army) and trained (mainly in the university) according to the State policy toward communism: selected mostly from the working class, educated in Soviet theory and practice of journalism and socialized through party membership. Soviet professionals continue to hold a cultivated view of journalism as important social work in natural collaboration with the authorities, whereby they have a natural responsibility to support social order and render practical guidance to people. They perform the role of social organizers with the inherent functions of upbringing, educating and punishing.

In contrast, the young generation of the 1990s represents a heterogeneous subculture consisting of different representatives regarding age, ethnicity, origin, education, experience and social class: they have rather self-interest in journalism than a romantic image of a (state) public service. They seek no professional association and prefer to act alone for profit, new life prospects and to satisfy creative ambitions. They orientate to the new role of entertainers of the masses through a sensational agenda and perceive journalism rather as PR for the promotion of political and economic interests of media clients (influential groups and persons in policy and business). They often combine permanent and freelance jobs doing services not only in journalism but also in commercial sector of the economy.

Despite their differences, both streams of journalism - the older generation patronizing the people and the young generation serving the elite and masses accept the political function of journalism as a propaganda machine; both participate on the side of the authorities, for example, in covering elections. Three conceptions on journalism can be identified: the journalist as propagandist, organizer and entertainer. These are crucially different from the corresponding Western roles: disseminator, interpreter and adversary. Thus, Russian journalism develops in its own cycle which reveals the strength of cultural traditions over political conjuncture.