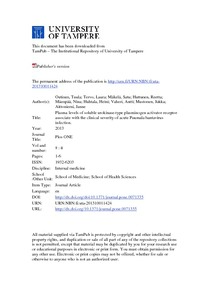 Urokinase-type plasminogen activator receptor is a multifunctional glycoprotein, the expression of which is increased during inflammation. It is known to bind to β3-integrins, which are elementary for the cellular entry of hantaviruses. Plasma soluble form of the receptor (suPAR) levels were evaluated as a predictor of severe Puumala hantavirus (PUUV) infection and as a possible factor involved in the pathogenesis of the disease.
Design

Plasma suPAR levels were measured twice during the acute phase and once during the convalescence in 97 patients with serologically confirmed acute PUUV infection using a commercial enzyme-linked immunosorbent assay (ELISA).
Results