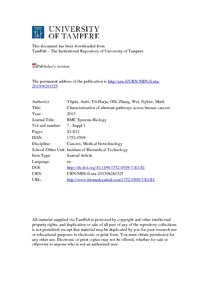 Cancer is a broad group of genetic diseases which account for millions of deaths worldwide each year. Cancers are classified by various clinical, pathological and molecular methods, but even within a well-characterized disease, there is a significant inter-patient variability in survival, response to treatment, and other parameters. Especially in molecular level, tumours of the same category can appear significantly dissimilar due to complex combinations of genetic aberrations leading to a similar malignancy. We extended the current classification methods by studying tumour heterogeneity at pathway level.
Methods

We computed the rate of alterations in 1994 pathways and 2210 tumours consisting of eight different cancers. Using gene set enrichment analysis, each sample was computed a pathway aberration profile that reflected its molecular state. The profiles were analysed together to infer the characteristic aberration rates for each pathway within each cancer. Subgroups of tumours defined by similar pathway aberrations were identified using clustering analyses. The pathway aberration and gene expression profiles of the subgroups were consecutively compared across all eight cancer types to search for similar tumours crossing the standard classification.
Results

We identified pathways and processes that were common to all cancers as well as traits that are unique to a cancer type or closely related cancers. Studying the gene expression patterns within the pathway context suggested potential alteration mechanisms. Clustering analysis revealed five clinically relevant subgroups of tumours in four cancers that exhibited significant differences in survival compared to others. The cross-cancer analysis of the subgroups resulted in the identification of tumours that shared potentially significant alterations.
Conclusions

This study represents the first effort to extend the molecular characterizations towards pathway level descriptions across the family of cancers. In addition to providing a proof-of-concept for single sample pathway aberration analysis in this context, we present a comprehensive pathway aberration dataset that can be used to study pathway aberration patterns within or across cancers. Significant similarities between subgroups of different cancers on pathway and gene expression levels provide interesting hypotheses for understanding variable drug response, or transferring treatments across diseases by identifying common druggable pathways or genes, for example.