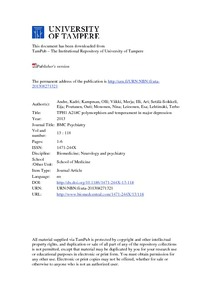 In major depression, one of the candidate genes possibly affecting the risk and severity of symptoms has been found to be tryptophan hydroxylase (TPH1). Variation in treatment response to antidepressive agents according to TPH1 genotype has also been found in several studies. However, the relationship between temperament and TPH1 genotype in major depression is poorly understood, as only one study has been published so far. There are no earlier studies on the interaction between temperament traits, antidepressive medication response and TPH1 genotype. This interaction was studied in 97 subjects with major depression treated for six weeks with selective serotonine reuptake inhibitors.
Methods

Temperament dimensions Harm Avoidance (HA), Novelty Seeking (NS), Reward Dependence (RD) and Persistence (P) scores at baseline (1) and endpoint (2) were rated with the Temperament and Character Inventory (TCI) and compared between TPH1 A218C genotypes. Multivariate analysis of co-variance (MANCOVA) was used to analyze the interaction between the TPH1 genotype, treatment response and the different temperament dimensions at baseline and endpoint. In the analysis model, treatment response was used as a covariate and TPH1 genotype as a factor. A post hoc analysis for an interaction between remission status and TPH1 A218C genotype at endpoint HA level was also performed.
Results

The number of TPH1 A-alleles was associated with increasing levels in NS1 and NS2 scores and decreasing levels in HA1 and HA2 scores between TPH1 A218C genotypes. In the MANCOVA model, TPH1 genotype and treatment response had an interactive effect on both HA1 and HA2 scores, and to a lesser degree on NS2 scores. Additionally, an interaction between remission status and TPH1 A218C genotype was found to be associated with endpoint HA score, with a more marked effect of the interaction between CC genotype and remission status compared to A-allele carriers.
Conclusions

Our results suggest that in acute depression TPH1 A218C polymorphism and specifically the CC genotype together with the information on remission or treatment response differentiates between different temperament profiles and their changes.