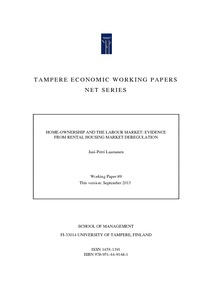 Perhaps the most common finding relating housing to the labour market is that high home-ownership rates are associated with higher unemployment. In contrast, recent micro-evidence suggests that homeowners have relatively favourable labour market outcomes. We explore the effect of home-ownership on unemployment exploiting a rental housing market deregulation reform which created exogenous variation in home-ownership across regions, allowing us to avoid the endogeneity problem in earlier studies. While home-owners are less likely to experience unemployment, an increase in the home-ownership rate causes unemployment to rise. Externalities arising from consumption reductions and increased job competition may explain the conflicting evidence.