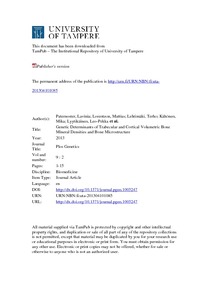 Most previous genetic epidemiology studies within the field of osteoporosis have focused on the genetics of the complex trait areal bone mineral density (aBMD), not being able to differentiate genetic determinants of cortical volumetric BMD (vBMD), trabecular vBMD, and bone microstructural traits. The objective of this study was to separately identify genetic determinants of these bone traits as analysed by peripheral quantitative computed tomography (pQCT). Separate GWA meta-analyses for cortical and trabecular vBMDs were performed. The cortical vBMD GWA meta-analysis (n = 5,878) followed by replication (n = 1,052) identified genetic variants in four separate loci reaching genome-wide significance (RANKL, rs1021188, p = 3.6×10−14; LOC285735, rs271170, p = 2.7×10−12; OPG, rs7839059, p = 1.2×10−10; and ESR1/C6orf97, rs6909279, p = 1.1×10−9). The trabecular vBMD GWA meta-analysis (n = 2,500) followed by replication (n = 1,022) identified one locus reaching genome-wide significance (FMN2/GREM2, rs9287237, p = 1.9×10−9). High-resolution pQCT analyses, giving information about bone microstructure, were available in a subset of the GOOD cohort (n = 729). rs1021188 was significantly associated with cortical porosity while rs9287237 was significantly associated with trabecular bone fraction. The genetic variant in the FMN2/GREM2 locus was associated with fracture risk in the MrOS Sweden cohort (HR per extra T allele 0.75, 95% confidence interval 0.60–0.93) and GREM2 expression in human osteoblasts. In conclusion, five genetic loci associated with trabecular or cortical vBMD were identified. Two of these (FMN2/GREM2 and LOC285735) are novel bone-related loci, while the other three have previously been reported to be associated with aBMD. The genetic variants associated with cortical and trabecular bone parameters differed, underscoring the complexity of the genetics of bone parameters. We propose that a genetic variant in the RANKL locus influences cortical vBMD, at least partly, via effects on cortical porosity, and that a genetic variant in the FMN2/GREM2 locus influences GREM2 expression in osteoblasts and thereby trabecular number and thickness as well as fracture risk.