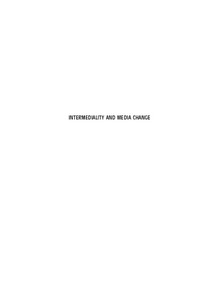 This book is about intermediality as an approach to analysing and understanding media change. Intermediality and Media Change is critical of technological determinism that characterises 'new media discourse' about the ongoing digitalization, framed as a revolution and creating sharp contrasts between old and new media. Intermediality instead emphasises paying attention to continuities between media of all types and privileges a comparative perspective on technological changes in media over time and space.

The concept of intermediality refers to interaction and interrelationships between media. This focus is important in two ways. It strengthens the mutual construction and articulation of media (forms) as a vital element of the research agenda. In contrast to the emphasis on convergence, it also permits the consideration of the parallel construction and articulation of specific features and identities that characterise a medium, as well as the emergence of new divergences.

Intermediality and Media Change studies intermediality from both theoretical and empirical perspectives. The book starts by positioning intermediality as a theory and a methodological approach. The first group of articles focuses on critical reflection of media and mediation as concepts. The second group deals with intermediality in discourses about media change. The third group concentrates on analysis of representative cases, and the fourth group focuses on media institutions and professions.