Self-reported rather than registered cancer is associated with psychosocial strain 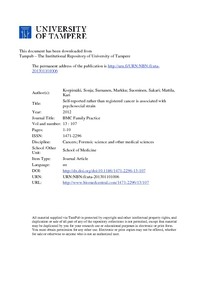 Individuals with only a subjective experience of cancer may conceal severe psychological distress and act like patients with verified disease. The purpose of the study was to establish whether some typical psychosocial factors may be linked to subjects with registered cancer (confirmed) and also to those with self-reported cancer lacking accompanying registered data (non-confirmed).
Methods

The material comprised 25 898 working-aged individuals (response rate 40.0%) in 1998. Of these 19 629 also responded at the follow-up in 2003 (response rate 75.8%). The analyses focused on respondents with cancer diagnosis in 2002 or earlier according to data of the Finnish Cancer Registry and self-report of cancer in 2003 (confirmed) (N=330) and on respondents with self-reported cancer only but lacking registered diagnosis (non-confirmed) (N=140). Those who neither reported cancer nor had a diagnosis were included as a control group (N= 18 299).
Results

Individuals with only a subjective experience of cancer reported more psychosocial strain than those with accompanying registered cancer. Self-report of a severe disease like cancer without corresponding clinical findings might reflect heavy psychological distress which should be taken into consideration in clinical work.
Keywords:
Cancer; Psychosocial factors; Self-reported disease