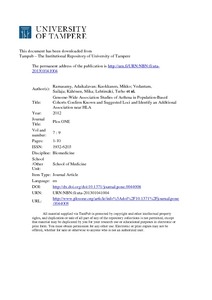 Asthma has substantial morbidity and mortality and a strong genetic component, but identification of genetic risk factors is limited by availability of suitable studies.
Objectives

To test if population-based cohorts with self-reported physician-diagnosed asthma and genome-wide association (GWA) data could be used to validate known associations with asthma and identify novel associations.
Methods

The APCAT (Analysis in Population-based Cohorts of Asthma Traits) consortium consists of 1,716 individuals with asthma and 16,888 healthy controls from six European-descent population-based cohorts. We examined associations in APCAT of thirteen variants previously reported as genome-wide significant (P<5x10−8) and three variants reported as suggestive (P<5×10−7). We also searched for novel associations in APCAT (Stage 1) and followed-up the most promising variants in 4,035 asthmatics and 11,251 healthy controls (Stage 2). Finally, we conducted the first genome-wide screen for interactions with smoking or hay fever.
Main Results

We observed association in the same direction for all thirteen previously reported variants and nominally replicated ten of them. One variant that was previously suggestive, rs11071559 in RORA, now reaches genome-wide significance when combined with our data (P = 2.4×10−9). We also identified two genome-wide significant associations: rs13408661 near IL1RL1/IL18R1 (PStage1+Stage2 = 1.1x10−9), which is correlated with a variant recently shown to be associated with asthma (rs3771180), and rs9268516 in the HLA region (PStage1+Stage2 = 1.1x10−8), which appears to be independent of previously reported associations in this locus. Finally, we found no strong evidence for gene-environment interactions with smoking or hay fever status.
Conclusions