MtDNA Maintenance by Twinkle and Polymerase Gamma in Health and Disease 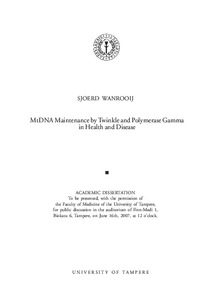 Most of the energy needed for cellular function is produced by organelles called mitochondria. The total process of this energy production system located within the mitochondria is called oxidative phosphorylation (OXPHOS). Some of the genes that encode essential subunits of this OXPHOS system are located in the mitochondrial DNA (mtDNA), a small circular genome that is separated from the nuclear DNA. For this reason proper maintenance of mtDNA is crucial for life. To understand which factors and mechanisms are involved in mtDNA replication and repair is important since defects in mitochondrial DNA are a common cause of human neuromuscular genetic disease and are also implicated in aging and infertility. The maintenance and replication of mtDNA depends on nuclear encoded genes. A defect in one of the nuclear genes involved in mtDNA maintenance can result in the accumulation of mtDNA abnormalities, like depletion or multiple deletions. Autosomal dominant progressive external ophthalmaplegia (adPEO) with multiple mtDNA deletion is an example of such a disorder. In this disease the multiple mtDNA deletions accumulate progressively during life and cause gradual paralysis of eye movements, ptosis and exercise intolerance all as a consequence of a slow decrease in energy production. Although several distinct autosmal loci for this disorder have been identified, in most cases the underlying nuclear gene defect remains unclear.

In this study we tried to identify novel factors involved in mtDNA maintenance and adPEO disease. We sequenced DNA obtained from adPEO patient in order to find the disease-causing nuclear gene defect. Further we measured the in vivo mtDNA replication fidelity in adPEO patient and compared the findings to age matched control. In order to learn more about the adPEO disease mechanism we mapped multiple mtDNA deletions to investigate at what kind of DNA sequences breakpoints occur. Based on this study we proposed a hypothesis of the mechanism behind deletion formation in adPEO. During later studies we used an inducible expression system in human cultured cells to study the functions of two proteins, involved in mtDNA maintenance and associated with adPEO, the novel mitochondrial replication protein Twinkle and POLG1 polymerase. This study created better understanding of the disease process underlying adPEO and the functions of Twinkle and POLG1 in general mtDNA replication. This basic research, discussed in this thesis will contribute to the understanding of human diseases caused by mitochondrial dysfunction that could ultimately result to development of a therapy.