Higher Education Policies in the EU and in the People's Republic of China. A Comparative Approach 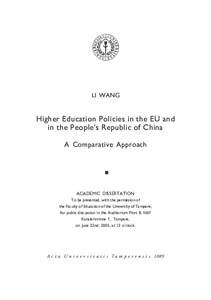 The argumentation and task presented above may serve as a frame of categorization and analysis of the materials. As the nature of the materials does not permit much quantitative analysis, conventional qualitative research methods of document and content analysis will be used. The approach used in this research is basically historic-genetic with the aim of examining the process of the forming of higher education policy in a problem-centered way.

The materials of the EU's and Chinese higher educational policies will be dissected from the policy texts and then arranged by classifying according to the subjects. After this, through close reading and elaborate analysis of the content, answers to the research questions will be sought. In the course of qualitative study, specific attention will be given to the exploratory and descriptive of the EU's and Chinese higher education policies in nature.

Not all comparative research seeks general explanations, but all research that seeks to offer general explanations must be comparative. Another important tool in the analysis is the comparative method. The very essence of comparison in this dissertation will be three steps: identification of differences and similarities; explanations of possible reasons or causes for these differences and similarities and then analysis, assessment, and conclusions including lessons to be drawn. Comparison will be involved in inductive reasoning process.

As a result of careful study, I have given a detailed picture of the status and development of the basic educational ideologies, strategies, contents, governance and decision-makings in both the EU and China systems. I have also explored the different backgrounds and considered the distinctive responses in Europe and China to future challenges in higher education. In addition, I have approached with much attention the role of higher education in promoting European integration, a topic that may have special relevance for China, given the huge size of the country and the diversity of different regions.

Regions and countries with different political and socioeconomic systems and dissimilar higher education traditions have similar patterns in reforms in higher education. On the basis of the study, it seems that the coherency of the Chinese system is deteriorating. It has become more flexible, the trend towards internationalization is obvious, and it is expanding and yet holding on to its competitiveness through increased effectiveness and commercialization. The Chinese higher education policies is also directing towards a more segmented and, regarding the needs of education, a more equipment oriented education supply. In the EU on the other hand, the system seems to be moving towards higher coherence, but the above described principles concerning China can also be applied to the EU. The common contextual factors, particularly the increasingly trend of globalization, seem to have considerably shaped higher education policy in the EU and China. The higher educational systems are, thus, at least at a normative level becoming more homogenized.

No nation has all the answers to the perplexing questions facing the new challenges of the 21st century, especially in the field of higher education system. National circumstances in terms of specific economic, sociological, political and educational realities are just too complicated for one to simply transfer institutions or even ideas from one country to another. Yet, perspectives from other countries can at least suggest ways of approaching problems that might lead to potential solutions. Comparative or joint higher education policies can illuminate and pose alternatives. This in itself is the right reason for this study to pay adequate attention.

The study will give readers some well-argumented information on how these two giants make use of higher education as a tool to face the challenges of knowledge-based economy and globalization.