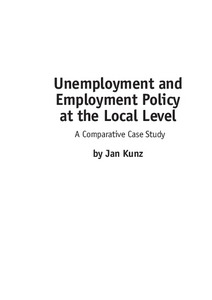 This study deals with employment policy measures and the effects of unemployment at the end of the twentieth century in the Finnish region of Tampere and the German region of Giessen. In doing so it combines elements of the Arbeitslosigkeitsforschung (the investigation of reasons and general effects of unemployment as well as possible solutions for the problem) with elements of the Arbeitslosenforschung (the investigation of who the unemployed are and what the unemployment means for them). For comparison of the social and economic situations in Tampere and Giessen an actor-centred approach was chosen. The focus is on governmental and non-governmental actors in the field of the regional employment policy as well as long-term unemployed people. The outcome of the study indicates similar individual and social effects of unemployment in the research regions. Many parallels were also found concerning the individual strategies of the governmental and non-governmental actors. On the other hand, fundamental differences could be observed with regard to the level of regional networking and the orientation towards the European Union. In both cases, Tampere performed better than Giessen, which contributed to a drastic reduction of the unemployment.

The differences and similarities between the research regions are explained by the following three conclusions: first of all, local strategies do not depend exclusively on European or national defaults but also to a large extent on region specific factors (in this case the historical role of the municipalities, the level of corporatism and consensus orientation, the perception of the unemployment and the general economic framework). Secondly, regions have the potential to overcome labour market crises and social exclusion to a certain extent, but only if the conditions are right and if there is the political will to do so. And thirdly, many of the similarities on the individual level are due to the influence of the Capitalist ethic on the meaning and functions of work in both German and Finnish society, while the correspondence of problems on the regional level must be seen in connection with the similar tasks and forms of organisations on behalf of the local governmental actors.