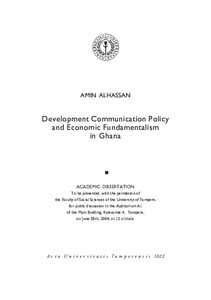 This book focuses on the articulation of development communication policy within the postcolonial nation-state. Taking Ghana as a case, it interrogates policy practices on broadcasting, telecommunications and Internet diffusion. This is done against two policy orientations of commodification as the requirement of globalization, on the one hand, as against the extension of citizens access to communication conduit as a requirement of nation building.

Historically, the postcolonial state appropriated for itself the mandate of development planning to put in place a new policy regime as part of the project to turn subjects into citizens. Such a task of civic community building underscores the central significance of the communicative infrastructure as the framework for the nation that is in the process of coming into being. The study is based on interviews and observations during research in Ghana in 2002 and an analysis of recent policy documents from the World Bank, the IMF and the Ghanaian state. It also investigates archival material on Gold Coast (as Ghana was previously called) and early independent Ghanaian policy practices. Combining political economy and cultural studies approaches, the book discusses the contemporary predilection of the postcolonial state towards market led development and teases out the implication of the new language of policy that privileges the exchange value over the use value of communication services. The book then traces the gradual re-articulation of communication as information as part of the logic of digital capitalism and uses this re-articulation of communication to illustrate the violence of economics on the postcolonial nation.

A bifurcated nation, the study concludes, is in the making. The urban landscape, especially, the capital city of Accra is characterized by a burgeoning community of digital consumption with internet cafés, telecenters and mobile telephony, springing up to augment the already media rich environment of multiple channels of electronic media and press. The rest of the country remains largely ignored by the market, bringing back to the table the question of nation building and commodification of communication as incongruent admixture for development and democratization of access. The promised national community of citizens based on a principle of inclusion is gradually turning out to be an exclusive economy of digital consumers in the urban centers and a disconnected constituent of non-city dwellers all in an increasingly unimaginable polity.