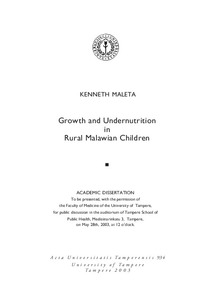 Malawi, a small, impoverished country in southeast Africa has some of the worst child health indicators in the world. Among the major child health problems in this country is undernutrition. The present prospective, population-based, cohort study was performed to describe typical growth patterns and occurrence and determinants of undernutrition in under 3-year-old children in Lungwena, rural Malawi.

Compared to the international growth reference children in Lungwena were born lighter and shorter. The deficit in growth persisted until 24 months of age and there was no catch up growth. By 36 months of age, the children were 2.3kg lighter and 10.5 cm shorter compared to the reference. Faltering in linear growth was already marked at birth while weight faltering appeared at about 3 months of age.
The growth faltering resulted in high prevalence of undernutriton such that at peak levels, up to 70%, 40%, and 6% of the children were moderately stunted, underweight and wasted respectively. The incidence of undernutrition fluctuated according to season. This seasonal pattern was also reflected in weight and height gain whereby periods of best linear growth gain consistently lagged periods of best weight gain by about 3 months after infancy. Such a temporal relationship between weight gain and linear growth was, however, not documented at the individual level.

To study the determinants of inci-dence of undernutrition, multivariable models of various forms of undernutrition were constructed. Among the studied correlates of undernutrition, size at birth, maternal HIV, infant morbidity and access to health care independently predicted the occurrence of undernutrition.
The high prevalence of moderate undernutrition in the present study necessitated evaluation of the options for management of moderate undernutrition. In Malawi this typically involved dietary supplementation with a micro-nutrient fortified maize / soy flour blend (Likuni Phala) whose effectiveness in promoting growth has been questioned. Apart from its nutrient quality, supplement leakage to nonintended beneficiaries and replacement of the beneficiary s usual dietary in-take were some of the problems associated with this food. The present study tested an energy dense, micronutrient fortified, peanut based spread called Ready to use food (RTUF) on moderately underweight and stunted 3 to 4 year old children. RTUF supplementa-tion resulted in higher energy and nu-trient intakes and less replacement compared to maize / soy flour. However RTUF did not prevent leakage. Both supplements modestly improved weight gain but did not promote height gain.

In conclusion, children in rural Malawi showed early growth faltering with no catch up growth. Prevention of undernutriton in this population should start prenatally and continue until after the second year of life. Such interventions, among others, should target reducing intrauterine growth retardation, HIV, and infant morbidity, and improving access to health care. However, effect of season should be taken into account when planning interventions. New strategies for dietary supplementation of moderately undernourished children, such as the use of energy dense spreads, should be evaluated. Preventing child undernutrition in this population may, however, take several generations, as the described growth pattern could also be familial.