The Determinants of the Revolutionary Disintegration of the State in Iran 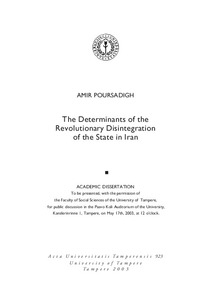 This is a study of the problems of state formation and the revolutionary disintegration of the state in Iran.The analysis is organized around four interrelated themes which account for an important aspect of the social origins of Iranian revolution: namely, the role of the state, its specific relations both to international developments and domestic classes, and economic conditions.

The study, therefore, is an interpretive history of the pattern of class formation and class alignment/conflict via the state with particular emphasis on the role of the state in this process. The main proposition of the study is that the Iranian revolution was a product of the contradictions of combined and uneven capitalist development in Iran. It was not Islamic ideology and/or Shia discourse that radicalized the revolutionary processes, but the power struggle itself brought the radicalization of the revolution.

Many of the slogans and key concepts during the revolutionary process were essentially democratic and borrowed from the West. But once the Pahlavi regime was swept aside, the drive toward Islamization began. If there were any ideological guiding force behind the revolution, the only ideology with a hope of mass support was populism which Khomeini incorporated all its significant aspect, appealing to the people s sense of: nationalism, respect for liberty and freedom, economic well-being, cultural heritage, and self-respect. This ideological mobilization was not possible without the contribution of moderate, secular, and leftist groups.

Exclusive concentration on the oppositional potential of Shiaism and its tradition of struggle and the organizational power of the mullahs embedded in their control over the mosques and bazaars, however, has led many analysts to focus largely on the ideologies origins and leader who advocated them. Thus they confuse the process of tactical coalition formation, in which different social groups shift their support to favor such leaders, with the process of ideological conversion, in which the participants tend to adhere to leaders ideologies. Failing to distinguish political coalition from ideological conversion, such analyses treat Shia Islam as it had a universal appeal to all social groups and classes. Shia ideology and/or Islam played no role or did little in the conflicts and collective actions of Iranian workers and entrepreneurs (bazaaris) who constituted the central actors in revolutionary conflicts and overthrow of the Shah s regime.