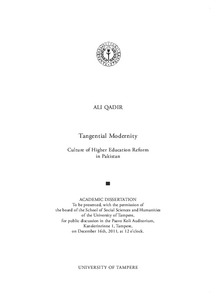 The aim of this thesis is to question, and to trace the construction of, the notion of modernity underpinning higher education and other development policy in Pakistan. The dissertation seeks to show how it is not possible to understand the contours of contemporary higher education policy reform in Pakistan without appreciating the centrality of being modern . Relying on anthropological approaches to culture and the social imaginary, the argument is that the current understanding of Pakistani modernity has been shaped by the history of colonialism, especially the narrative of colonial Muslim modernity. The analysis shows how the ways in which modernity is currently debated in Pakistan embodies various historical sediments that stretch back to early 19th century in British colonial India.

The thesis attempts to identify these sediments to show how these historical traces are constitutive of a social imaginary of modernity around which the various impulses for reform in higher education are now articulated. In this sense, the thesis represents an attempt to historicise current discourses of reforms to higher education in Pakistan. Drawing on the author s own participation in recent policy reforms and on key Pakistani and British colonial historical texts, the analysis presents four major themes underpinning the rhetoric of modernity in contemporary Pakistani higher education: global connectedness, English language instruction, predominance of utilitarian views of higher education, and secularism. Crucially, while the institutionalisation of modern higher education in British India paralleled similar trends in England at the same time, the former was significantly distorted within the colonial milieu, resulting in a tangential modernity that is evident in Pakistan today. Besides contributing to mainstream higher education reform in Pakistan the thesis thus proposes the usefulness of more historically rooted transnational understandings of ex-colonial societies.