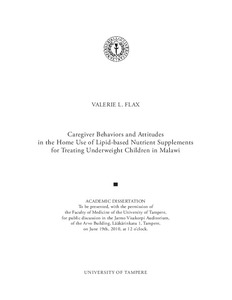 Undernutrition is an important public health problem that affects millions of children. It contributes to poor health and mortality and has negative consequences that continue into adulthood. The burden of child undernutrition is highest in sub-Saharan Africa. Strategies for improving nutritional status have usually targeted dietary intake. Providing supplementary or better complementary food is one of the most direct interventions for the problem of child undernutrition. To implement effective supplementary feeding interventions, it is essential to understand the sociocultural and behavioral factors that affect how supplementary foods are used in a particular setting. Such information can be used to design improved supplementary feeding programs.

The present study took place in Malawi, a long, narrow landlocked country in southeast Africa with high levels of some forms of child undernutrition. This research was carried out in the same rural area of Mangochi District where clinical trials testing the effectiveness of a new type of supplementary food, lipid-based nutrient supplements (LNS), for treating underweight 6-17-month-olds and for preventing undernutrition were underway. Other members of the research team focused on the growth and development outcomes of children receiving LNS as compared to a common supplement, corn-soy blend (CSB), whereas this research investigated sociocultural aspects of supplementary food use.

The study was situated within the positivist scientific tradition and it assessed the feasibility of compliance with supplementary feeding interventions in this setting. Its main aim was to identify caregivers attitudes, practices, and behaviors related to the home use of LNS. We investigated feeding patterns and caregiver behaviors before and during LNS use (n=16), how patterns of LNS use changed over time (n=16), how the supplement was used during illness and convalescence (n=16), and how its use compared to that of CSB (LNS n=85, CSB n=85). Quantitative and qualitative data on mothers attitudes towards LNS and CSB were also obtained (LNS n=249, CSB n=255). Data were collected through direct observations and interviews. The majority of the data were obtained in 2005 and 2006, but interviews on maternal attitudes continued until mid-2008.

As compared to feeding practices at baseline and during CSB supplementation, use of LNS did not affect the frequency of feeding solid foods, the number or duration of breastfeeds, or the total amount of time spent feeding the child. When LNS was provided in jars containing a 5-day supply, caregivers first tried giving it in different ways, but after four weeks of use they integrated LNS into their regular feeding regimen by nearly always adding it to porridge. When LNS was provided in packets for daily use, it was more often eaten plain than mixed with porridge. As compared to CSB, LNS was less frequently offered as a meal, caregivers washed their hands less often before feeding it, and it was less likely that some of the supplement was left over at the end of a feeding episode. The same types of behavioral patterns were identified when plain LNS was compared to LNS mixed with porridge, indicating that most of the differences in behaviors during CSB and LNS supplementation were linked to the distinctive behaviors associated with plain LNS. The presence of leftovers at the end of supplementary feeding episodes was associated with low child weight-for-age.

Maternal attitudes towards LNS and CSB were generally similar. Mothers reported that both supplements were highly acceptable, most children adapted to eating them within two weeks, and mothers would be willing to use them again or buy them. Supplements tended to be thought of as food rather than medicine. Mothers whose children were in the LNS group were willing to pay more than those in the CSB group for a one-week supply of the supplement. They were also more likely to say that they would withhold the supplement during cough because the sweetness could worsen symptoms. Maternal education was negatively associated and child s initial weight-for-height z-score was positively associated with maternal attitudes towards withholding of supplements during fever, diarrhea, and cough.

Similar attitudes towards LNS and CSB suggest that caregivers would have little trouble adopting LNS, if it were to replace CSB, in supplementary feeding programs. The sweetness of LNS may deter its use during cough, indicating that a less sweet version of LNS might be beneficial in this setting. As use of LNS during illness and convalescence is good, programs could promote its use during these periods as a possible way of maintaining nutritional status. LNS supplementary feeding programs might be able to influence the way the supplements are used by providing clear messages that promote specific caregiver behaviors, such as hand washing before supplement meals and mixing LNS in a small amount of porridge to minimize leftovers.