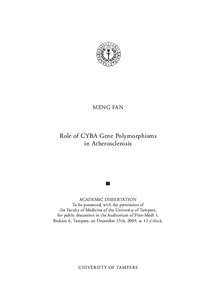 Atherosclerosis is a multi-factorial disease caused by environmental and genetic risk factors as well as their interactions. In the present study, we used a candidate gene approach to study the possible impact of CYBA gene polymorphisms in NADPH oxidase and gene-environment interactions on the early chronic inflammatory process as represented by CRP level, functional and structural changes in the arterial wall, and clinically significant coronary artery disease (CAD). Cohort studies and a nested case-control study were conducted with two Finnish populations, comprising 2,283 young adults who participated in the 21-year follow-up of the Cardiovascular Risk in Young Finns Study, and 402 high-risk patients who were selected from the participants of the Finnish Cardiovascular Study.

NADPH oxidase is the only enzyme whose sole function is to generate ROS, and it has been considered as the most important source of ROS in vascular wall and inflammatory cells. Most established risk factors for cardiovascular disease have been associated with an overproduction of ROS. Moreover, ROS and NADPH oxidase have been implicated in numerous cell processes and the pathogenesis associated with atherosclerosis. Genetic polymorphisms in the genes encoding the NADPH oxidase subunits, such as CYBA gene polymorphisms, modulate ROS production, influencing the progression of cardiovascular disease. Identifying groups of individuals genetically prone or resistant to oxidative stress might not only be useful for the stratification of the individuals and the development of individualized approaches for the care and treatment of high-risk individuals, but also to allow the design and interpretation of appropriate clinical trials for new dietary or pharmacological interventions with antioxidants.