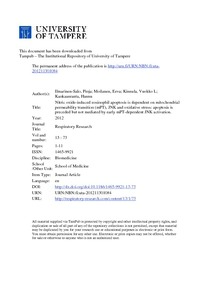 Eosinophils are critically involved in the pathogenesis of asthma. Nitric oxide (NO) is produced in high amounts in asthmatic lungs and has an important role as a regulator of lung inflammation. NO was previously shown to induce eosinophil apoptosis mediated via c-jun N-terminal kinase (JNK) and caspases. Our aim was to clarify the cascade of events leading to NO-induced apoptosis in granulocyte macrophage-colony stimulating factor (GM-CSF)-treated human eosinophils concentrating on the role of mitochondria, reactive oxygen species (ROS) and JNK.
Methods

Apoptosis was determined by flow cytometric analysis of relative DNA content, by Annexin-V labelling and/or morphological analysis. Immunoblotting was used to study phospho-JNK (pJNK) expression. Mitochondrial membrane potential was assessed by JC-1-staining and mitochondrial permeability transition (mPT) by loading cells with calcein acetoxymethyl ester (AM) and CoCl2 after which flow cytometric analysis was conducted. Statistical significance was calculated by repeated measures analysis of variance (ANOVA) or paired t-test.
Results

NO-donor S-nitroso-N-acetyl-D,L-penicillamine (SNAP) induced late apoptosis in GM-CSF-treated eosinophils. SNAP-induced apoptosis was suppressed by inhibitor of mPT bongkrekic acid (BA), inhibitor of JNK SP600125 and superoxide dismutase-mimetic AEOL 10150. Treatment with SNAP led to late loss of mitochondrial membrane potential. Additionally, we found that SNAP induces early partial mPT (1 h) that was followed by a strong increase in pJNK levels (2 h). Both events were prevented by BA. However, these events were not related to apoptosis because SNAP-induced apoptosis was prevented as efficiently when BA was added 16 h after SNAP. In addition to the early and strong rise, pJNK levels were less prominently increased at 20–30 h.
Conclusions

Here we demonstrated that NO-induced eosinophil apoptosis is mediated via ROS, JNK and late mPT. Additionally, our results suggest that NO induces early transient mPT (flickerings) that leads to JNK activation but is not significant for apoptosis. Thereby, we showed some interesting early events in NO-stimulated eosinophils that may take place even if the threshold for irreversible mPT and apoptosis is not crossed. This study also revealed a previously unknown physiological function for transient mPT by showing that it may function as initiator of non-apoptotic JNK signalling.
Keywords:
Eosinophils; Apoptosis; Nitric oxide; Mitochondrial permeability transition; JNK; Reactive oxygen species