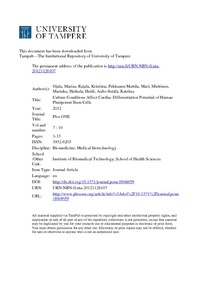 Plos ONE 7 10
1-13
This publication is copyrighted. You may download, display and print it for Your own personal use. Commercial use is prohibited.

Human pluripotent stem cells (hPSCs), including human embryonic stem cells (hESCs) and human induced pluripotent stem cells (hiPSCs), are capable of differentiating into any cell type in the human body and thus can be used in studies of early human development, as cell models for different diseases and eventually also in regenerative medicine applications. Since the first derivation of hESCs in 1998, a variety of culture conditions have been described for the undifferentiated growth of hPSCs. In this study, we cultured both hESCs and hiPSCs in three different culture conditions: on mouse embryonic fibroblast (MEF) and SNL feeder cell layers together with conventional stem cell culture medium containing knockout serum replacement and basic fibroblast growth factor (bFGF), as well as on a Matrigel matrix in mTeSR1 medium. hPSC lines were subjected to cardiac differentiation in mouse visceral endodermal-like (END-2) co-cultures and the cardiac differentiation efficiency was determined by counting both the beating areas and Troponin T positive cells, as well as studying the expression of OCT-3/4, mesodermal Brachyury T and NKX2.5 and endodermal SOX-17 at various time points during END-2 differentiation by q-RT-PCR analysis. The most efficient cardiac differentiation was observed with hPSCs cultured on MEF or SNL feeder cell layers in stem cell culture medium and the least efficient cardiac differentiation was observed on a Matrigel matrix in mTeSR1 medium. Further, hPSCs cultured on a Matrigel matrix in mTeSR1 medium were found to be more committed to neural lineage than hPSCs cultured on MEF or SNL feeder cell layers. In conclusion, culture conditions have a major impact on the propensity of the hPSCs to differentiate into a cardiac lineage.