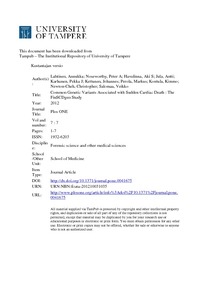 Plos ONE 7 7
1-7
This publication is copyrighted. You may download, display and print it for Your own personal use. Commercial use is prohibited.

Sudden cardiac death (SCD) accounts for up to half of cardiac mortality. The risk of SCD is heritable but the underlying genetic variants are largely unknown. We investigated whether common genetic variants predisposing to arrhythmia or related electrocardiographic phenotypes, including QT-interval prolongation, are associated with increased risk of SCD.
Methodology/Principal Findings