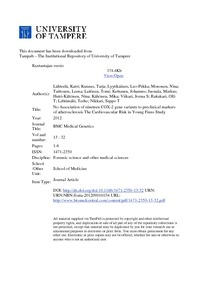 The role of cyclooxygenase-2 (COX-2) single nucleotide polymorphisms has mostly been studied in relation to advanced atherosclerosis, but little is known how they contribute to preclinical disease. In the present study we analyzed whether COX-2 gene variants associate independently with the early subclinical markers of atherosclerosis, carotid intima-media thickness and carotid artery distensibility in a population of young healthy Caucasian adults.
Methods

SNPs for association analysis were collected from the COX-2 gene and 5 kb up- and downstream of it. There were 19 SNPs available for analysis, four genotyped and fifteen imputed. Genotype data was available for 2442 individuals participating in the Cardiovascular Risk in Young Finns Study. Genotype imputation was performed using MACH 1.0 and HapMap II CEU (release 22) samples as reference. Association analysis was performed using linear regression with an additive model. PLINK was used for true genotyped SNPs and ProbABEL for imputed genotype dosages. False discovery rate was used to take into account multiple testing bias.
Results

Our results suggest that in a Finnish population, there are no significant associations between COX-2 variants and early atherosclerotic changes in young adulthood.