Lifestyle counselling during pregnancy and offspring weight development until four years of age: follow-up study of a controlled trial 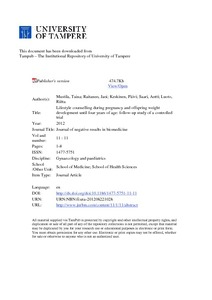 Fetal conditions are known to be partly responsible for the child’s risk for obesity. Our pilot study aimed to determine the effect of gestational lifestyle counseling on the offspring weight gain until 4 years of age and to estimate power for future studies.
Design and methods

In this pilot study gestational lifestyle counseling did not significantly slow the weight gain of the offspring. Gestational intervention studies with at least 300 mothers per group are needed to confirm the possible effect on offspring’s risk for obesity.