Expression of iron-related genes in human brain and brain tumors 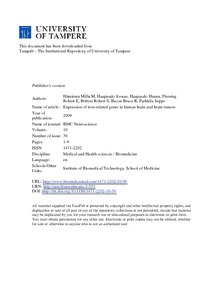 Defective iron homeostasis may be involved in the development of some diseases within the central nervous system. Although the expression of genes involved in normal iron balance has been intensively studied in other tissues, little is known about their expression in the brain. We investigated the mRNA levels of hepcidin (HAMP), HFE, neogenin (NEO1), transferrin receptor 1 (TFRC), transferrin receptor 2 (TFR2), and hemojuvelin (HFE2) in normal human brain, brain tumors, and astrocytoma cell lines. The specimens included 5 normal brain tissue samples, 4 meningiomas, one medulloblastoma, 3 oligodendrocytic gliomas, 2 oligoastrocytic gliomas, 8 astrocytic gliomas, and 3 astrocytoma cell lines.

Except for hemojuvelin, all genes studied had detectable levels of mRNA. In most tumor types, the pattern of gene expression was diverse. Notable findings include high expression of transferrin receptor 1 in the hippocampus and medulla oblongata compared to other brain regions, low expression of HFE in normal brain with elevated HFE expression in meningiomas, and absence of hepcidin mRNA in astrocytoma cell lines despite expression in normal brain and tumor specimens.

These results indicate that several iron-related genes are expressed in normal brain, and that their expression may be dysregulated in brain tumors.