HER-2 positive breast cancer: decreasing proportion but stable incidence in Finnish population from 1982 to 2005 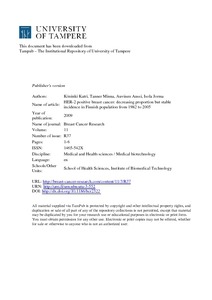 Classification of breast cancers according to the HER-2 oncogene status is of central importance in the selection of post-surgical therapies. A decrease in the proportion of HER-2-positive breast cancer has been suspected, but no data on the incidence trends at population level have been reported.

The proportion of HER-2-positive breast cancer declined from 21.6% (average in 1982 to 1986) to 13.6% (average in 2004 to 2005). However, during the same time period the age-adjusted incidence of all invasive breast cancers had increased by 40%. These opposite trends balanced each other and indicated that the incidence of HER-2-positive breast cancer has remained unchanged (Poisson regression coefficient for time trend 1.000; 95% CI = 0.989 to 1.012). In contrast, the incidence of HER-2-negative cancer showed 2% annual increase (Poisson regression coefficient 1.021, 95% CI = 1.016 to 1.026). Although HER-2-negative cancers were more likely to be diagnosed by mammography screening, the changes were more likely to be explained by etiological risk factors favoring HER-2-negative (and hormone receptor-positive) disease such as menopausal hormone therapy.