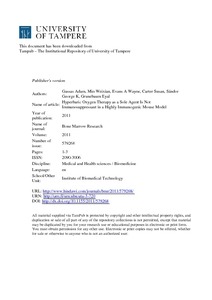 Background. Hyperbaric oxygen (HBO) therapy, which is used for many conditions, may also have immunosuppressive effects and could be used for prevention or treatment of graft-versus-host disease (GvHD). If HBO is immunosuppressant, then we hypothesize that HBO therapy will delay the T-cell mediated skin graft rejection. Methods. C57/BL6 black-coated (H2B) mice received skin graft from CBA (H2D) white-coated mice. Mice were treated with either 19 session of 240 kpa oxygen or 29 session of 300 kpa oxygen, for 90 minutes. Mice were housed either 4 per cage or separately, to prevent friction and mechanical factors that may affect graft survival. Skin grafts were assessed daily. Results. There was no difference in length of graft survival between mice that received either regimens of HBO therapy and mice that did not receive HBO therapy. Conclusions. HBO therapy, as a sole agent, did not delay skin graft rejection in a highly immunogenic mouse model.