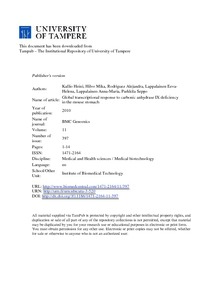 Carbonic anhydrases (CAs) are a family of enzymes that regulate pH homeostasis in various tissues. CA IX is an exceptional member of this family because in addition to the basic CA function, it has been implicated in several other physiological and pathological processes. Functions suggested for CA IX include roles in cell adhesion and malignant cell invasion. In addition, CA IX likely regulates cell proliferation and differentiation, which was demonstrated in Car9-/- mice. These mice had gastric pit cell hyperplasia and depletion of chief cells; however, the specific molecular mechanisms behind the observed phenotypes remain unknown. Therefore, we wanted to study the effect of CA IX deficiency on whole-genome gene expression in gastric mucosa. This was done using Illumina Sentrix®Mouse-6 Expression BeadChip arrays. The expression of several genes with notable fold change values was confirmed by QRT-PCR.

CA IX deficiency caused the induction of 86 genes and repression of 46 genes in the gastric mucosa. There was 92.9% concordance between the results obtained by microarray analysis and QRT-PCR. The differentially expressed genes included those involved in developmental processes and cell differentiation. In addition, CA IX deficiency altered the expression of genes responsible for immune responses and downregulated the expression of several digestive enzymes.

Microarray analysis identified several potential genes whose altered expression could explain the disturbed cell lineage phenotype in the Car9-/- gastric mucosa. The results also indicated a novel role for CA IX in the regulation of immunologic processes and digestion. These findings reinforce the concept that the main role of CA IX is not the regulation of pH in the stomach mucosa. Instead, it is needed for proper function of several physiological processes.