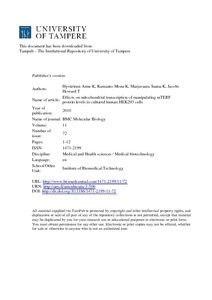 To test this hypothesis, we engineered human HEK293-derived cells for over-expression or knockdown of mTERF, and measured the steady-state levels of transcripts belonging to different transcription units, namely tRNALeu(UUR) and ND1 mRNA for the PH2 transcription unit, and tRNAPhe plus 12S and 16S rRNA for the PH1 transcription unit. The relative levels of 16S rRNA and ND1 mRNA were the same under all conditions tested, although mTERF knockdown resulted in increased levels of transcripts of 12S rRNA. The amount of tRNAPhe relative to tRNALeu(UUR) was unaffected by mTERF over-expression, altered only slightly by mTERF knockdown, and was unchanged during recovery from ethidium bromide-induced depletion of mitochondrial RNA. mTERF overexpression or knockdown produced a substantial shift (3-5-fold) in the relative abundance of antisense transcripts either side of its high-affinity binding site.

mTERF protein levels materially affect the amount of readthrough transcription on the antisense strand of mtDNA, whilst the effects on sense-strand transcripts are complex, and suggest the influence of compensatory mechanisms.