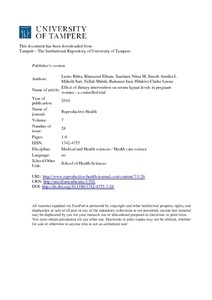 Mother's diet during pregnancy is important, since plant lignans and their metabolites, converted by the intestinal microflora to enterolignans, are proposed to possess multiple health benefits. Aim of our study was to investigate whether a dietary intervention affects lignan concentrations in the serum of pregnant women.

The dietary intervention was successful in increasing the intake of lignan-rich food products, the fiber consumption and consequently the plasma levels of lignans in pregnant women.