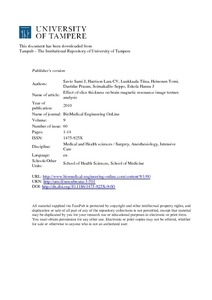 The accuracy of texture analysis in clinical evaluation of magnetic resonance images depends considerably on imaging arrangements and various image quality parameters. In this paper, we study the effect of slice thickness on brain tissue texture analysis using a statistical approach and classification of T1-weighted images of clinically confirmed multiple sclerosis patients.

We averaged the intensities of three consecutive 1-mm slices to simulate 3-mm slices. Two hundred sixty-four texture parameters were calculated for both the original and the averaged slices. Wilcoxon's signed ranks test was used to find differences between the regions of interest representing white matter and multiple sclerosis plaques. Linear and nonlinear discriminant analyses were applied with several separate training and test sets to determine the actual classification accuracy.

Only moderate differences in distributions of the texture parameter value for 1-mm and simulated 3-mm-thick slices were found. Our study also showed that white matter areas are well separable from multiple sclerosis plaques even if the slice thickness differs between training and test sets.