Do socioeconomic differences in tobacco use exist also in devloping countries? A study of Ghanaian adolescents 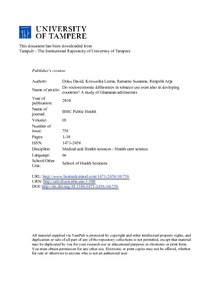 A school-based survey of a representative sample of 13-18-year-old Ghanaians (N = 1,165, response rate = 89.7%) was conducted in three regions, in 2008. Logistic regression analysis was used to evaluate the relationship of smoking, tawa (smokeless tobacco) use with familial SES (parental occupation and education, material affluence scale, family structure), an adolescent's individual social position (school performance, plans after graduation) and inter-generational social mobility (predicted by the differences of familial and individual positions).

Socioeconomic differences existed in tobacco use whether measured by familial SES or individual social position with higher prevalence in lower socioeconomic groups. Low father's education and living in a non-nuclear family were associated with both forms of tobacco use while low material affluence was associated with tawa use only; individual social position measured by plans after graduation was the strongest predictor of both smoking and tawa use. Inter-generational downward social mobility and particularly staying in low SES was related to both forms of tobacco use.

Similar to Western countries, lower SES is related to an adolescent's tobacco use also in developing countries. Cumulative socioeconomic disadvantage over generations increases the probability of tobacco use.