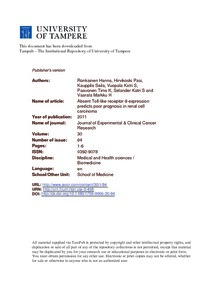 Toll-like receptor 9 (TLR9) is a cellular DNA-receptor whose activation with cognate ligands triggers an immune reaction, with increased production of inflammatory cytokines. The aim of this study was to examine the expression of TLR9 in renal cell carcinoma (RCC), which is generally renowned of its immunogenic nature. We also evaluated the prognostic value of TLR9 in RCC.

TLR9 expression in RCC was characterized with immunohistochemistry in a retrospective study population of 152 RCC patients who underwent renal surgery. The TLR9 staining intensity was compared with clinical parameters.