Functional Characterization of the Infection-Inducible Peptide Edin in Drosophila melanogaster 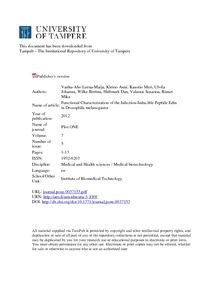 Drosophila is a well-established model organism for studying innate immunity because of its high resistance against microbial infections and lack of adaptive immunity. In addition, the immune signaling cascades found in Drosophila are evolutionarily conserved. Upon infection, activation of the immune signaling pathways, Toll and Imd, leads to the expression of multiple immune response genes, such as the antimicrobial peptides (AMPs). Previously, we identified an uncharacterized gene edin among the genes, which were strongly induced upon stimulation with Escherichia coli in Drosophila S2 cells. Edin has been associated with resistance against Listeria monocytogenes, but its role in Drosophila immunity remains elusive. In this study, we examined the role of Edin in the immune response of Drosophila both in vitro and in vivo. We report that edin expression is dependent on the Imd-pathway NF-κB transcription factor Relish and that it is expressed upon infection both in vitro and in vivo. Edin encodes a pro-protein, which is further processed in S2 cells. In our experiments, Edin did not bind microbes, nor did it possess antimicrobial activity to tested microbial strains in vitro or in vivo. Furthermore, edin RNAi did not significantly affect the expression of AMPs in vitro or in vivo. However, edin RNAi flies showed modestly impaired resistance to E. faecalis infection. We conclude that Edin has no potent antimicrobial properties but it appears to be important for E. faecalis infection via an uncharacterized mechanism. Further studies are still required to elucidate the exact role of Edin in the Drosophila immune response.