Results from a blind and a non-blind randomised trial run in parallel: experience from the Estonian Postmenopausal Hormone Therapy (EPHT) Trial 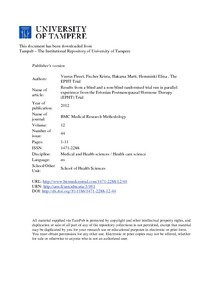 The Estonian Postmenopausal Hormone Therapy (EPHT) Trial assigned 4170 potential participants prior to recruitment to blind or non-blind hormone therapy (HT), with placebo or non-treatment the respective alternatives. Before having to decide on participation, women were told whether they had been randomised to the blind or non-blind trial. Eligible women who were still willing to join the trial were recruited. After recruitment participants in the non-blind trial (N = 1001) received open-label HT or no treatment, participants in the blind trial (N = 777) remained blinded until the end of the trial. The aim of this paper is to analyse the effect of blinding on internal and external validity of trial outcomes.
Methods
Effect of blinding was calculated as the hazard ratio of selected chronic diseases, total mortality and all outcomes. For analysing the effect of blinding on external validity, the hazard ratios from women recruited to the placebo arm and to the non-treatment arm were compared with those not recruited; for analysing the effect of blinding on internal validity, the hazard ratios from the blind trial were compared with those from the non-blind trial.
Results
The women recruited to the placebo arm had less cerebrovascular disease events (HR 0.43; 95% CI: 0.26-0.71) and all outcomes combined (HR 0.76; 95% CI: 0.63-0.91) than those who were not recruited. Among women recruited or not recruited to the non-treatment arm, no differences were observed for any of the outcomes studied.