Is the core-periphery labour market structure related to perceived health? findings of the Northern Swedish Cohort 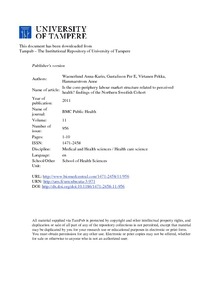 There is controversy as to whether peripheral employment is related to poor health status or not. This study aims at examining whether 1) the accumulation of time in peripheral labour market positions is associated with psychological distress and poor or average self-rated health; 2) the proposed association is different among women than among men.

Participants in the 1995 and 2007 follow-up surveys of the Northern Swedish Cohort (n = 985) completed self-administered questionnaires about psychological and general health and about employment positions during the follow-up years. Associations between 12 year peripheral labour market positions (no, low, medium and high exposure) and health were examined using logistic regression.