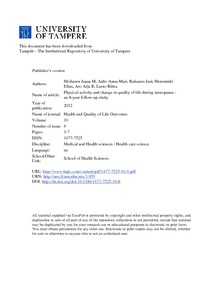 The aim of this study was to study the role of menopausal status and physical activity on quality of life.
Methods
A total of 1,165 Finnish women aged 45-64 years from a national representative population-based study were followed up for 8 years. Study participants completed the Health 2000 study questionnaire and follow-up questionnaire in 2008. Ordinal logistic regression analysis was used to measure the effect of menopausal status on global quality of life (QoL). Other variables included in the analyses were age, education, change of physical activity as assessed with metabolic equivalents, change of weight and hormone therapy (HRT) use.
Results
Peri- and postmenopausal women increased their physical activity (28% and 27%) during the eight-year follow up period slightly more often than premenopausal (18%) women (p = 0.070). Menopausal status was not significantly correlated with change of QoL. QoL of the most highly educated women was more likely to improve than among the less educated (eb = 1.28, 95%CI 1.08 to 1.51 p = 0.002). Women whose physical activity increased or remained stable had greater chances for improved QoL than women whose physical activity decreased (eb = 1.49, 95%CI 1.23 p < 0.001 to 1.80, eb = 1.46, 95%CI 1.24 to 1.73 p < 0.001 respectively). Women whose weight remained stable during follow-up also improved their QoL compared to women who gained weight (eb = 1.26, 95%CI 1.07 to 1.50 p > 0.01). Women who had never used HRT had 1.26 greater odds for improved QoL (95%CI 1.02 to 1.56 p = < 0.05).
Conclusion
Improvement of global QoL is correlated with stable or increased physical activity, stable weight and high education, but not with change in menopausal status.