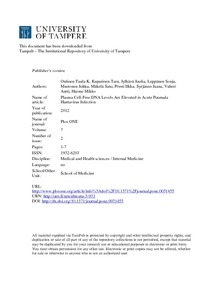 Puumala hantavirus (PUUV) causes a hemorrhagic fever with renal syndrome called nephropathia epidemica (NE). The aim of the present study was to evaluate plasma cell-free DNA (cf-DNA) levels and urinary cf-DNA excretion in acute NE as well as their associations with the severity of the disease.

Total plasma cf-DNA was quantified directly in plasma of 61 patients and urine of 20 patients with acute NE. We also carried out a qualitative high-sensitivity lab-on-a-chip DNA assay in 20 patients to elucidate the appearance of cf-DNA in plasma and urine.

The maximum plasma cf-DNA values taken during acute NE were significantly higher than the control values taken after the hospitalization period (median 1.33 µg/ml, range 0.94–3.29 µg/ml vs. median 0.77 µg/ml, range 0.55–0.99 µg/ml, P<0.001). The maximum plasma cf-DNA levels correlated positively with maximum blood leukocyte count (r = 0.388, P = 0.002) and the length of hospital stay (r = 0.376, P = 0.003), and inversely with minimum blood platelet count (r = −0.297, P = 0.020). Qualitative analysis of plasma cf-DNA revealed that in most of the patients cf-DNA displayed a low-molecular weight appearance, corresponding to the size of apoptotic DNA (150–200 bp). The visually graded maximum cf-DNA band intensity correlated positively with the maximum quantity of total plasma cf-DNA (r = 0.513, P = 0.021). Maximum urinary excretion of cf-DNA in turn was not markedly increased during the acute phase of NE and did not correlate with any of the variables reflecting severity of the disease or with the maximum plasma cf-DNA level.

The plasma levels of cf-DNA are elevated during acute PUUV infection and correlate with the apoptotic cf-DNA-band intensity. The plasma cf-DNA concentration correlates with some variables reflecting the severity of the disease. The urinary excretion of cf-DNA does not reflect the degree of inflammation in the kidney.