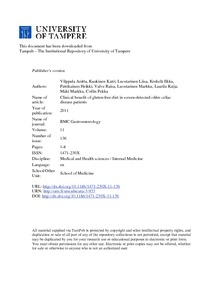 The utility of serologic screening for celiac disease is still debatable. Evidence suggests that the disorder remains undetected even in the older population. It remains obscure whether screening makes good or harm in subjects with long-standing gluten ingestion. We evaluated whether older subjects benefit from active detection and subsequent gluten free dietary treatment of celiac disease.

Thirty-five biopsy-proven patients aged over 50 years had been detected by serologic mass screening. We examined the disease history, dietary compliance, symptoms, quality of life and bone mineral density at baseline and 1-2 years after the commencement of a gluten-free diet. Symptoms were evaluated by gastrointestinal symptom rating scale and quality of life by psychological general well-being questionnaires. Small bowel biopsy, serology, laboratory parameters assessing malabsorption, and bone mineral density were investigated.

Dietary compliance was good. The patients had initially low mean serum ferritin values indicating subclinical iron deficiency, which was restored by a gluten-free diet. Vitamin B12, vitamin D and erythrocyte folic acid levels increased significantly on diet. Celiac patients had a history of low-energy fractures more often than the background population, and the diet had a beneficial effect on bone mineral density. Alleviation in gastrointestinal symptoms was observed, even though the patients reported no or only subtle symptoms at diagnosis. Quality of life remained unchanged. Of all the cases, two thirds would have been diagnosed even without screening if the family history, fractures or concomitant autoimmune diseases had been taken carefully into account.

Screen-detected patients benefited from a gluten-free diet. We encourage a high index of suspicion and active case-finding in celiac disease as an alternative to mass screening in older patients.