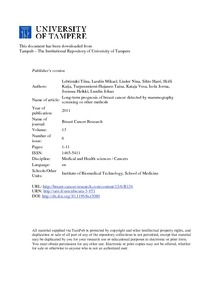 Previous studies on breast cancer have shown that patients whose tumors are detected by mammography screening have a more favorable survival. However, little is known about the long-term prognostic impact of screen-detection. The purpose of the current study was to compare breast cancer-specific long-term survival between patients whose tumors were detected in mammography screening and those detected by other methods.

Breast cancer patients diagnosed within five specified geographical areas in Finland in 1991-92 were identified (n=2,936). Detailed clinical, treatment and outcome data as well as tissue samples were collected. Women with in situ carcinoma, distant metastases at the primary diagnosis and women who were not operated were excluded. Main analyses were made with exclusions of patients with other malignancy or contralateral breast cancer followed by to sensitivity analyses with different exclusion criterias. Median follow-up time was 15.4 years. Univariate and multivariate analysis of breast cancer-specific survival were performed.

Of patients included in the main analyses (n=1,884) 22% (n=408) were screen-detected and 78% (n=1,476) were detected by other methods. Breast cancer-specific 15-year survival was 86% for patients with screen-detected cancer and 66% for patients diagnosed by other methods (p<0.0001, HR=2.91). Similar differences in survival were also observed in women at screening age (50-69 years) as well as in clinically important subgroups, such as patients with small tumors ([less than or equal to]1cm in diameter) and without nodal involvement (N0). Women with breast cancer diagnosed by screening mammography had a more favorable prognosis compared to those diagnosed outside of screening program following adjustments according to patient age, tumor size, axillary lymph node status, histological grade and hormone receptor status. Significant differences in the risk of having future contralateral breast cancer according to method of detection was not observed .

Breast cancer detection in mammography screening is an independent prognostic factor in breast cancer and is associated with a more favorable survival also in long-term follow-up.