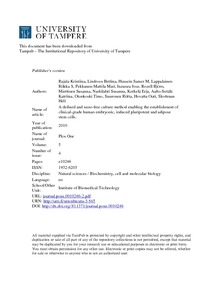 The growth of stem cells in in vitro conditions requires optimal balance between signals mediating cell survival, proliferation, and self-renewal. For clinical application of stem cells, the use of completely defined conditions and elimination of all animal-derived materials from the establishment, culture, and differentiation processes is desirable.

Here, we report the development of a fully defined xeno-free medium (RegES), capable of supporting the expansion of human embryonic stem cells (hESC), induced pluripotent stem cells (iPSC) and adipose stem cells (ASC). We describe the use of the xeno-free medium in the derivation and long-term (>80 passages) culture of three pluripotent karyotypically normal hESC lines: Regea 06/015, Regea 07/046, and Regea 08/013. Cardiomyocytes and neural cells differentiated from these cells exhibit features characteristic to these cell types. The same formulation of the xeno-free medium is capable of supporting the undifferentiated growth of iPSCs on human feeder cells. The characteristics of the pluripotent hESC and iPSC lines are comparable to lines derived and cultured in standard undefined culture conditions. In the culture of ASCs, the xeno-free medium provided significantly higher proliferation rates than ASCs cultured in medium containing allogeneic human serum (HS), while maintaining the differentiation potential and characteristic surface marker expression profile of ASCs, although significant differences in the surface marker expression of ASCs cultured in HS and RegES media were revealed.

Our results demonstrate that human ESCs, iPSCs and ASCs can be maintained in the same defined xeno-free medium formulation for a prolonged period of time while maintaining their characteristics, demonstrating the applicability of the simplified xeno-free medium formulation for the production of clinical-grade stem cells. The basic xeno-free formulation described herein has the potential to be further optimized for specific applications relating to establishment, expansion and differentiation of various stem cell types.