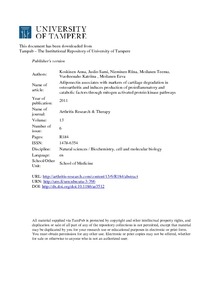 Adiponectin is an adipokine that regulates energy metabolism and insulin sensitivity, but recent studies have pointed also to a role in inflammation and arthritis. The purpose of the present study was to investigate the association and effects of adiponectin on inflammation and cartilage destruction in osteoarthritis (OA).

Cartilage and blood samples were collected from 35 male OA patients undergoing total knee replacement surgery. Preoperative radiographs were evaluated by Ahlback classification criteria for knee OA. Circulating concentrations of adiponectin and biomarkers of OA, i.e. cartilage oligomeric matrix protein (COMP) and matrix metalloproteinase 3 (MMP-3), were measured. Cartilage samples obtained at the surgery were cultured ex vivo and the levels of adiponectin, nitric oxide (NO), interleukin-6 (IL-6) and metalloproteinases MMP-1 and MMP-3 were determined in the culture media. In addition, the effects of adiponectin on the production of NO, IL-6, MMP-1 and MMP-3 were studied in cartilage and in primary chondrocyte cultures.

These findings show that adiponectin is associated with and possibly mediates cartilage destruction in OA.