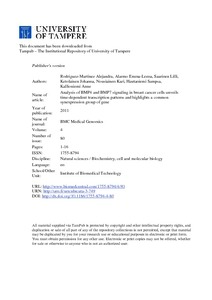 Bone morphogenetic proteins (BMPs) are members of the TGF-beta superfamily of growth factors. They are known for their roles in regulation of osteogenesis and developmental processes and, in recent years, evidence has accumulated of their crucial functions in tumor biology. BMP4 and BMP7, in particular, have been implicated in breast cancer. However, little is known about BMP target genes in the context of tumor. We explored the effects of BMP4 and BMP7 treatment on global gene transcription in seven breast cancer cell lines during a 6-point time series, using a whole-genome oligo microarray. Data analysis included hierarchical clustering of differentially expressed genes, gene ontology enrichment analyses and model based clustering of temporal data.
Results
Both ligands had a strong effect on gene expression, although the response to BMP4 treatment was more pronounced. The cellular functions most strongly affected by BMP signaling were regulation of transcription and development. The observed transcriptional response, as well as its functional outcome, followed a temporal sequence, with regulation of gene expression and signal transduction leading to changes in metabolism and cell proliferation. Hierarchical clustering revealed distinct differences in the response of individual cell lines to BMPs, but also highlighted a synexpression group of genes for both ligands. Interestingly, the majority of the genes within these synexpression groups were shared by the two ligands, probably representing the core molecular responses common to BMP4 and BMP7 signaling pathways.
Conclusions
All in all, we show that BMP signaling has a remarkable effect on gene transcription in breast cancer cells and that the functions affected follow a logical temporal pattern. Our results also uncover components of the common cellular transcriptional response to BMP4 and BMP7. Most importantly, this study provides a list of potential novel BMP target genes relevant in breast cancer.